After the success of Ipswich’s Reclaim the Night 2018 at Suffolk Rape Crisis, we were eager to continue the momentum and come back even bigger and brighter for 2019! And so, we did!

We began the planning much earlier this year, and we decided that we would use have a specific theme/calling. With that in mind, Reclaim the Night Ipswich called for an end to victim blaming. We called on the Police, services and local authorities throughout Suffolk to change the way they talk about sexual violence. This included calling out specific campaigns in Suffolk which told women and girls that it was ‘their responsibility to keep themselves safe’. [For full details on this campaign see our blog entitled #AfterNightFail. This ‘advice’ doesn’t work, and it places the onus once again on women and girls to prevent sexual violence. These campaigns and safety ‘advice’ contribute to victim blaming and distract from where the focus should be – on perpetrators.

In addition to the march, we secured a market stall in a busy walkway of Ipswich where we advertised Suffolk Rape Crisis and our services and sold our brand new Reclaim the Night merchandise. We also had placards available for women and girls to design for the march and encouraged them to highlight their own experiences of victim blaming- which they did.

Alongside the usual media coverage- we secured a spot on BBC Suffolk Radio’s Breakfast Show- where we were able to spend a whole morning raising awareness on the radio, the day of Reclaim the Night. This was the first time in Suffolk that any charity service had been give this space, so we were eager to use it to advertise our services and the activism work we do, alongside raise awareness of sexual violence and it’s affect on women. We created an entire programme of conversation around victim blaming and what this looks like in day to day life. We received excellent feedback from this, and it invited lots of women across Suffolk to join us in the evening.

Finally, after all our planning and preparation- on the evening of Saturday 30th November, women across Suffolk marched in solidarity in Ipswich to Reclaim the Night. We took to the streets with our megaphones, glittery placards, and loud, loud voices. We finished the march at Ipswich’s town hall, where Wassup! performed powerful spoken word poetry, The Womens Equality Party joined us, and our director Amy Roch gave a speech about why this event was imperative in today’s society- a society where sexual violence is allowed to continue.

We were so proud of our second Reclaim the Night! We came together to highlight the unacceptable levels of violence against women within our communities and throughout the world. We used our voices to demand the right to use our streets in safety on this night and every night. And we called on our politicians, local businesses and organisations to do their part to end violence against women. And we’ll do it all again next year.

Whose streets, our streets!
The Team @ SRC!

You can find coverage of the event here: 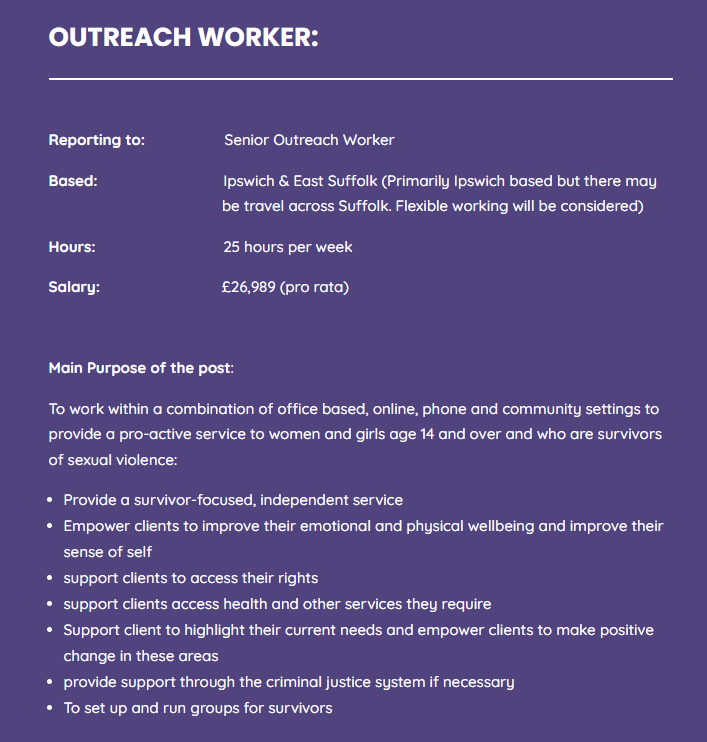